The peace accord with MNLF has led to the establishment of the Autonomous Region for Muslim Mindanao (ARMM) that consists of Basilan, Sulu, Tawi-tawi, Maguindanao and Lanao del Sur.

Misuari had wanted a politically oriented campaign while Salamat was pressing for more radical action to create a purely Islamic state.

Salamat however, admitted that there was an ethnic angle involved as well. Misuari’s MNLF had been dominated by members of his tribe, the Tausogs, while Salamat and his followers were mainly from the Maranao tribe of Lanao and Maguindanaoan tribe of Cotabato.

While it is true that the government has tackled the two major rebel groups into its fold, local and foreign terrorists like the Abu Sayyaf and Jemaah Islamiyah are still on the rampage and capable in carrying out threats and terrorism activities disturbing the tranquility of Mindanao. 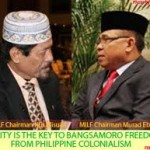