Andy Murray beats the Swiss world number one Roger Federer in straight sets, 6-2, 6-1, 6-4, indulging in the roar of the Center Court crowd.

The victory marked a career breakthrough for Murray who has lost all four of his Grand Slam finals, three against Federer, including Wimbledon a month ago.

He’s the first Briton to win the Olympic men’s singles gold medal since Josiah Ritchie in 1908.

Victorious over Djokovic in the semi-finals, Murray troubled an error-strewn Federer from the outset. After saving two break points in the opening game of the match, he broke serve in game six before holding for 5-2 with two booming aces.

For Federer, the drubbing marked another Olympic disappointment. Playing in the games for the fourth time, he sought a victory to complete a career Golden Slam but settled for silver, his first singles medal.

Afterwards Murray climbed into the stands to celebrate with his girlfriend, family and support team as Federer again missed out on the one accolade missing from his CV.

Juan Martin del Potro of Argentina, took the bronze who defeated Serbia’s Novak Djokovic 7-5, 6-4 in an hour and 48 minutes earlier in the day. 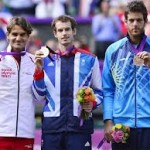