It was a sweet victory for Murray who has been struggling to win a grand slam title. He become the first Briton to land a singles crown at one of the four majors since Fred Perry in 1936.

The victory came nine weeks following Murray’s loss to Roger Federer in the Wimbledon final and four weeks after he gained revenge over the world number one on the same court to win Olympic gold.

Former world tennis no. 1 Ivan Lendl, the Czech-American whom Murray hired at the end of last year to be his coach was instrumental to make the technical improvements, most noticeably his forehand and second serve, but the main difference has been the mental steel and belief that Lendl appears to have instilled in his charge. 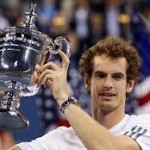