The death of DILG Secretary Jess Robredo caught everyone by surprise, no one had expected that such a young age and healthy he was, he would forever be taken from us for good by our Lord Almighty God.

For sure God knows best what is in store for the good secretary. Seldom we could find at this time, a public servant so dedicated to serve the government and his people with such a simple lifestyle and so humble that he treated everyone as his co-equal in status, as everyone is very important to him.

There is no iota of doubt that what Secretary Robredo preaches, he practices, when he says, that irregardless of what career you are in, you have to love it and be good at it.

No wonder that at a young age of 42 he received the Ramon Magsaysay Award for government service (Asia’s equivalent of the European Nobel Prize) because he was the epitome of a dedicated public servant.

At a young age of 29, he became the Mayor of Naga in 1988 which was then a third class city when he took over.

During his stint as mayor, he was able to convert Naga from a dull into a vibrant first class city in the Bicol Region because of his dedication and hands on governance.

He was a down to earth public servant that he freely roamed alone around the city in casual outfit without any fear of his safety. He loves to interact with people at the grassroots level in his community.

None other than President Ramon Magsaysay did that during his presidency when he roams around a place in casual clothing sporting a buri hat, meeting and talking to anyone on the street.

Could we call it coincidence, that both President Magsaysay and Secretary Robredo have a knack in the engineering profession, that both died in plane crash and has each, a lone survivor in those two accidents of their time.

They both came from Cebu after a speaking engagement and both were in a hurry to get home because they both wanted to be with their families during weekends.

Secretary Robredo was named Secretary to the Department of the Interior and Local Government (DILG) by President Benigno Aquino III on July 10, 2010.

His death on August 18, 2012 was a great loss to the Filipino people whom he served with unwavering integrity and utmost dedication.

His legacy would be an inspiration to everyone and an eye opener to other public servants who fall short in serving the Filipino people. 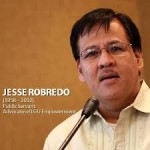