The fight between Nonito Donaire and Toshiaki Nishioka for the WBO Super bantamweight championship & the vacant WBC Diamond superbantamweight title ended in a technical knockout in the ninth round when the referee stopped the bout in favor of Donaire.

Throughout the bout Nishioka was hesitant to engage full blown against Donaire, the right hand of the Japanese champion was noticeably on guard on the right side of his head fearful perhaps that the Filipino flash at any moment would unleash a devastating left hook that could send him prematurely to dreamland.

It was Donaire who dictated the pacing of the fight. The first knockdown scored by Donaire was in the sixth round when he floored the Japanese champion with an uppercut.

During the duration of the fight the Japanese was always caught off guard when Donaire unleashed those one or more punches combinations that has kept Nishioka to be on the defensive mode.

In the ninth round Donaire set the Japanese up while the Filipino flash was leaning on the ropes and Nishioka was on the aggressive stance and taking advantage of the opportunity by throwing a couple of punches to Donaire’s face when he was counter punched by the Filipino champion a right straight to the face that put the Japanese down for the second time.

Nishioka tried to get up with his still wobbly legs. The Japanese champion was given by the referee the opportunity to come back and redeem himself only to be stopped by the referee again when he could not sustain the further onslaught of Donaire. 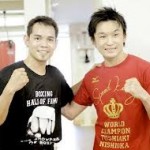