Leading global financial institutions like the Asian Development Bank (ADB), Standard &Poor and Credit Suisse and Bank of America-Merrill Lynch were unanimous in their appraisal on the state of Philippine economy for 2012.

They unilaterally raised their growth forecast for the Philippines, even as estimates for other Asian economies were lowered their base forecast, amid a weak global economy.

The Asian Development Bank (ADB) has upgraded from 4.8 percent to 5.5 percent, its growth forecast for the Philippines for 2012 given the strong expansion in the first half of the year.

‘Robust private consumption and a rebound in government spending drove economic growth higher than expected in the first half of 2012, prompting an upward revision of the forecast for the full year,’ the ADB report said.

However, ADB warned the uncertainty in the global economy may hurt the Philippines’ economic forecasts.

‘The key challenge is to link economic growth to poverty reduction. Despite solid economic growth, job generation remains inadequate, reflected in rates of unemployment and underemployment,’ according to Neeraj Jain, ADB country director for the Philippines.

The Philippines’ gross domestic product rose 6.1 percent in the first six months of the year, making it Asia’s third best-performing economy next to China and Indonesia ‘reflecting the ongoing strength of the domestic economy for this year,’ according to S&P.

Earlier, Credit Suisse and Bank of America-Merrill Lynch have upgraded their economic growth forecasts for the Philippines following the better-than-expected first-semester performance of the economy for 2012.

The forecasts of both Credit Suisse and Merrill Lynch exceed the 4.9-percent market consensus for Philippine growth based on the August poll of Consensus Economics.

‘While the base for exports going into third quarter is not favorable, we think domestic demand and government spending will continue to offset the external weakness,’ Credit Suisse said.

It also said, the first two quarter’s data supported its view that sequential GDP growth might soften as the boost from electronic export waned. In addition to the robust private consumption growth, Credit Suisse added that investments would likely play a more prominent role in boosting growth this year. 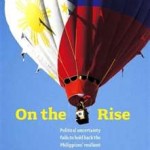