There were speculations that Pacquiao may or may not fight in November. Truth to the matter Pacquiao has not decided yet if ever he fights this year.

Having been with Arum as his promoter for years now, it was the first time Arum left the Philippines empty handed after talking to Pacquiao.

It does mean one thing, it’s only Arum wants the fight period. During their talks, Pacquiao has insisted to Arum that he waived to fight in November because he wanted this time, a megafight with Mayweather jr. to happen early next year.

Pacquiao has reasoned out to Arum that it makes no sense to fight these recycled fighters whom Arum was endorsing because he had already defeated them.

Besides, Pacquiao is hesitant to fight Bradley for the rematch as Pacquiao receives less money this time than what he previously received, while Bradley is asking more money from Arum for the rematch which would make sense because he is now the paper champion and Arum must have guaranteed a better purse for Bradley at Pacquiao’s expense.

If you are a Pacquiao who received a US$ 28 million dollars purse in his first fight with Bradley which he clearly won, do you think it could be acceptable to you to receive less money while Bradley receive more than he supposedly should get for the rematch?

Not unless it is restored to its previous purse arrangement I don’t think Pacquiao would want a Bradley rematch to happen.

However, Pacquiao might be amenable to fight Marquez for the last time in a quadrilogy in November, whatever his decision is, let’s wait and see. 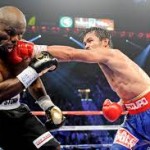