The P-Noy government program on achieving rice self sufficiency by 2013 is commendable.

However, the Department Of Agriculture (DA) with Secretary Proceso Alcala at the helm must realize that in achieving such an ambitious plan they have to learn the lessons from the Masagana 99 of President Marcos that made the Philippines rice self sufficient and rice exporter in the region of Southeast Asia in the mid seventies.

The Marcos program was a blueprint to harvest a ‘bountiful’ 99 cavans of rice (4,900 kilos) per hectare.

The Masagana 99 program demonstrated that given all the support by the government through key timely funding to farmers, rice production could increase so that self-sufficiency in rice was achieved.

The current DA reliance on crafted statistics is empty if without a detailed program and approach like that of the Masagana 99 of how they could be achievable.

No wonder that the Asian Development Bank (ADB) said recently that the country will not meet its target on the staple crop based solely on Department of Agriculture declaration.

ADB rice experts earlier said, the Aquino administration will be unable to achieve its rice self-sufficiency target by next year because of the lack of productive infrastructure needed to make this possible.

While Secretary Alcala refutes the ADB assessment, he instead challenged them to visit rice producing provinces in the country to see for themselves the improvement the administration has done to enhance agriculture production.

The DA according to Alcala is implementing a new system for farmers to easily access their needed farm inputs such as fertilizers and certified or hybrid seeds.

Though the idea is no longer new because it was already implemented during the Marcos regime, it still falls short to that of the successful Masagana 99’s objective which has four elements, namely: Access to improved technology, credit, price support for rice and provision of low cost fertilizer.

Another challenge by DA has to face is climate change which imposes serious risks to farming communities.

“For every one degree Celsius increase in temperature, rice yields are expected to drop by 10 percent,” said Kaka Constantino, Oxfam’s Advocacy, Campaigns and Communications Coordinator in the Philippines.

Constantino urges the country to adapt immediately and exert utmost effort to build our capacity to cope up climate change while targeting self sufficiency in rice should definitely be one among many adaptation measures that the country should take.

DA has assumed in their projection, that all is well in 2013, that the country would be spared and free from any destructive calamities like that of ‘Ondoy’ and the effects of ‘Habagat’ that the country has experienced this year.

Where almost all the rice producing provinces in Central Luzon, the rice fields were destroyed by the flood induced by continuous rainfall. 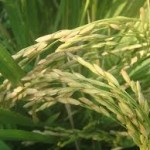