The rivalry between The Philippines and Mexico in boxing is well known, this month alone two big boxing events were showcased, one was that of the recently concluded Pacquiao-Marquez welterweight championship fight which ended in Mexico’s favor when Pacquiao lost to Marquez by knockout in the sixth round.

There were speculations that Donaire will taste the same fate as that of Pacquiao. Arce like Marquez is the underdog in his upcoming fight with Donaire. Arce is motivated to defeat the ‘Filipino Flash’ in a spectacular fashion to silence his critics that he has no chance against Donaire.

Arce has something to brag about regarding his obsession to defeat Donaire this time because Marquez and Travieso share a common training and conditioning coach in their fight preparations.

Like Pacquiao-Marquez tetralogy, speculation is rife that the Donaire-Arce tandem, would not last the distance. Though there is some truth on such speculation, it is not absolute. Truth to it is that the upcoming fight is anybody’s ball game.

However, the old adage of ‘style makes fight’ applies, Donaire being a natural boxer and an excellent counter puncher has a slight edge over Arce.

Besides, Arce’s fighting style is meant for Donaire who is cultured for the sweet science of defense and offense. Donaire’s forte is to look for openings and capitalize his opponent’s mistake which you can seldom find in every fighter.

What is left for Arce is his big heart, being a warrior typical to Mexican fighters. In his forthcoming fight with Donaire we want to see, if Arce’s motivation and big heart are sufficient to catapult him to victory against Donaire. Let’s see. 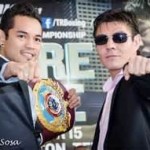