The one on one meeting between P-Noy and Chinese Premier Hu Jintao is a welcome news to both countries.

The incoming bilateral talks between the two leaders would eventually reduce the tension over the disputed claims of the group of islands that straddles along the West Philippine sea by China.

Secretary del Rosario stressed that the issue on the West Philippine Sea is not the ‘sum total’ of the relations between the Philippines and China.

Meaning it would be in the interest and common benefit for both countries to settle such dispute in a peaceful manner without jeopardizing the existing good relationship between the two countries.

There is a good reason why China is interested in the disputed islands because they have been known to have a large deposit of fossil fuel that China is in dire need to sustain their growing economy.

The Philippines on the other hand, based its rightful claim on the United Nations Convention Law of the Seas (UNCLOS) setting exclusive economic zones to 200 nautical miles from shore where the disputed islands rightly fall within the Philippine territorial limit.

China doesn’t want that the United States or any other country with the same interest to theirs to get involved in the dispute. China wants to settle out with the concern country to iron out their differences in a bilateral mutual understanding that both countries would benefit.

What China wants to emphasize that if there is a dispute between its neighbors it should be settled between them without interference of a third party like the US.

The Philippines on the other hand is just adapting precautionary measures that in case the dispute would not be settled amicably between the two countries which could eventually lead to war, the country is banking on the mutual defense treaty with the US to provide the country military logistical support.

However, many political analyst believed that China would want to settle the disputes among its neighbors amicably since becoming a global economic leader after the US.

China believes that it would be of their best interest to maintain good relationship with its neighbors and it’s open to the idea of a joint corroboration in exploration if it involves disputed islands with large energy deposits.

One has to believe China’s intention because as a matter of policy they themselves are against hegemonism and historically they don’t have any imperialistic expansionism like other colonialist countries of the past where they colonized territories beyond their shores. 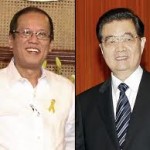