One has to give Manny Pacquiao the benefit of the doubt that he could beat Juan Manuel Marquez convincingly this time, if possible by knockout.

Marquez on the other hand has boasted that he has unraveled Pacquiao’s secret to beat him, the key was the three knockdowns he suffered in the first round of their first encounter, after which Marquez was able to neutralize Pacquiao’s onslaught to finish the bout to turn the tide with a draw decision from the judges’ scorecard.

Two more fights had ensued after the first fight but the controversy still lingers that the fights were so close that the Marquez camp believed that he should had won all those three fights.

This has always been the case especially if Pacquiao failed to stop a smaller Marquez in contrary to what he has done to bigger opponents like Oscar de la Hoya, Miguel Cotto and Antonio Margarito.

The problem was compounded when Marquez declared that he was robbed of victories in the judges scorecards of his defeat against Pacquiao.

Marquez vowed that the only way he can beat Pacquiao in the judges’ scorecard is to knock him out in their upcoming quadrilogy.

Meanwhile, Pacquiao had never been vocal to counter the charges thrown at him by Marquez. In his trilogy with the Mexican warrior, Pacquiao believes that he had not done enough to win convincingly against Marquez that had caused the dismay of a lot people who believe in him.

So much so, that most of his boxing fans and boxing aficionados were disappointed that he failed to deliver what was expected of him.

What they were expecting especially bettors of the sport was a stoppage by Pacquiao, but to their disappointment it didn’t happen.

Since then, many have wondered if Pacquiao’s waning has something to do with his loss of interest towards the sport in preference to other extra-curricular undertakings.

Others, however, believe that Pacquiao is bored to the punch having fought Marquez for the third time which does not pose a challenge to him anymore.

While others noted that Pacquiao excels well to fighters that always pose a challenge to him, and has carved a name to the sport like de la Hoya, Miguel Cotto, Ricky Hatton, Antonio Margarito, Shane Mosley and his foremost elusive target, Floyd Mayweather Jr.

Whatever reasons, Pacquiao has sensed to end the stigma that surrounds the controversy between him and Marquez.

He vowed to stop once and for all the insinuations made by Marquez that he was robbed of victories.

With that said, Pacquiao has promised to win the fight convincingly this time.

If Pacquiao can be able to do it, is something we want to see comes December 15 of this year. 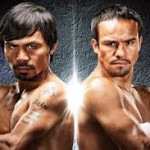