The Philippines has maintained its position as one of the fastest growing economies where business confidence in the first three quarters of 2012 has been above the 40 percent level.

The country’s economic growth of 5.9 percent in the second quarter of this year is among the highest in the region next to China’s 7.6 percent and Indonesia’s 6.4 percent.

Bangko Sentral ng Pilipinas Acting Deputy Director of Dept. of Economic Statistics Teresita Deveza, traced the record high Confidence Index (CI) for the fourth quarter this year to expectations for higher business volumes, expansion of business and new product lines, higher government infrastructure due to the Public-Private Partnership projects, and increased spending due to the holiday season and the upcoming national elections next year.

The main contributors in the second quarter economic growth of 5.9 percent were derived from the following:

*** Service sector that includes business process outsourcing (BPO), tourism, wellness activities which has remained resilient and the main driver of the economic growth.

The economic benefits of tourism which the Department of Tourism spearheaded has generated 2.1 million visitors for the first half of the year representing 11.68 percent growth.

*** Government’s infrastructure spending, which grew a staggering 45.7 percent during the quarter also contributed to the economy, boosting the local construction industry growth by 10 percent.

*** The ongoing conditional cash transfer (CCT) program initiated by the government which focused on alleviating the plight of those in the lower economic rung, also contributed to the growth.

*** However, the agricultural and mining sectors were sluggish because both registered a decimal percentage economic growth of 0.73 percent and 0.4 percent respectively.

*** Overseas Filipino Workers’ (OFWs) remittances remains the country’s main dollar earner which brings in about US$ 22 billion dollars a year. It has stayed resilient but increasing despite the pace of growth has slowed down.

*** The inflation rate is within the government’s projected range of 3 to 5 percent, that has boosted consumption, a key factor in economic growth.

*** Meanwhile, the country’s export industry which is the second dollar earner remains affected with the global crisis and has declined for most of 2011 and was blamed for the drastic slowdown in economic growth to 3.6 percent in 2011 from a robust 7.6 percent in 2010

Despite the economic gains earned, challenges ahead await for the country’s third quarter economic growth this year, typhoons hit the capital and key agricultural regions which mostly be felt in the third quarter.

The typhoons left many Filipinos without homes, but the loss in property, particularly those in Metro Manila will be able to boost consumption spending.

However, prevailing global economic conditions like the slowdown in China’s economy, the continuing euro zone problem, and higher oil prices are other downside risks to the economic growth which economic experts believe would likely to continue. 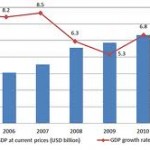