To attain these targets, the PEDP identified key export sectors, which taken together make up 87 percent of our current business whose performance will drive export growth.

“These products and services have a high probability of success based on current volumes, supply chain attributes, local value-added and total employment. Also, these sectors are consistent with the priorities of the Philippine Development Plan 2011-2016,” according to Senen M. Perlada, director of the Bureau of Export Trade Promotion (BETP).

Export of Philippine products and services is seen to significantly contribute to the government’s goal of inclusive growth and the priorities of the PEDP 2011-2016.

Perlada emphasized in his presentation on the impact of exports on employment during the 9th Trade Promotion Organization (TPO) Network World Conference at the MATRADE Exhibition and Convention Center (MECC) Kuala Lumpur, Malaysia.

“For the Philippines to attain inclusive growth through trade, we have to sustain growth, create jobs, and reduce poverty,” he said.

In sustaining the country’s growth, Perlada said that export growth rate should be at least at par with ASEAN neighbors.

“Philippine exports have been growing at a slower rate because of weak demand especially in large consumer market such as the US (United States) and EU (European Union),” he noted.

At present, merchandise trade is concentrated in electronics, computer parts and auto parts.

There is also a relative success in the services sector, particularly in the business process outsourcing (BPO).

According to the Business Processing Association of the Philippines (BPAP), the BPO industry currently employs 650,000 people.

Aside from this, the Philippine government wants to increase its annual international arrivals to 10 million by 2016 from three million today.

The growing tourism sector is seen to help employ the country’s increasing population as it nears 100 million.

“For trade to help in the reduction of poverty, we gave importance on trade that induces income growth through production and service activities directly in poor areas. There are a lot of opportunities in agriculture, resource-based value-adding activities, eco-tourism and community-based tourism,” Perlada said.

“If we accomplish our targets to double our total export to US$ 120 billion by 2016, the outcome is increased local employment, and consequently, a better quality of life for more Filipinos,” he added. 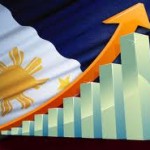