The Philippine Supreme Court (SC) in its latest decision granted a petition filed by the Ampatuans, asking the high court to reconsider a June 14, 2011 ruling penned by then Associate Justice and now Ombudsman Conchita Carpio-Morales that allowed live coverage of the high-profile Maguindanao massacre trial.

The Court en banc, in an eight-page resolution dated October 23, 2012 held that allowing live media coverage of the trial would violate the constitutional right of the accused under Section 14, Article III of the Constitution.

The said provisions upholds the accused right to due process, to be presumed innocent until proven guilty, and to an impartial and public trial, and the requirement of the highest quantum of proof to justify deprivation of his liberty.

However, the SC allowed audio-visual recordings of the trial for documentary purposes and for transmittal in closed-circuit viewing areas within the Camp Bagong Diwa premises and trial courts in Maguindanao, Koronadal, South Cotabato, and General Santos City.

In view of the Supreme Court decision banning live media coverage on the Ampatuan case, President Aquino asked the High Tribunal to ‘revisit’ its decision.

Justice Secretary Leila de Lima assailed the decision of the Supreme Court (SC) to abandon its ruling issued last year, which allowed live radio and television coverage of the ongoing trial of the massacre of 57 persons, including 32 journalists, in Ampatuan, Maguindanao, almost three years ago.

De Lima would meet with government prosecutors and private lawyers handling the case to determine what legal actions to take to convince the Court to allow live media coverage of the trial.

The National Press Club of the Philippines (NPC) said it would appeal the reversal by the Supreme Court (SC) of its earlier position allowing the live media coverage of the ongoing trial.

“The reversal is not only surprising but also dismaying for the entire media community and human rights advocates everywhere,” said NPC president Benny Antiporda.

“Experience has taught us that as soon as a sensational case has been removed from the public’s attention, all sorts of ‘negotiations’ happen leading to the exoneration of the guilty parties and the perversion of justice.”

“It is important for us, both the public and media, to be able to know what’s going on in the Maguindanao massacre trial,” he said.

The SC also expressed apprehension that allowing live media coverage of the trial might influence the judge’s decision on the case and the witnesses behavior during his or her testimony.

“A witness’s behavior and self-consciousness before the camera in a high-profile case such as this case might compromise the reliability of the fact-finding process, which in turn could skew the judge’s assessment of his or her credibility, necessarily affecting the resolution of the case,” the SC ruled.

The Amnesty International (AI)-Philippines said the SC decision is an ‘unwelcome development.’

“We are deeply concerned that without the public eye, the trial might be delayed further prolonging the agony of the families of the victims who are awaiting justice,” said Ritz Lee Santos, chair of AI-Philippines.

For Bayan Muna Representative, Neri Colmenares, “The length of the trial will surely favor the Ampatuans as they hope that public interest and attention will wane as years go by.”

He said the SC decision to ban live coverage is a deadly blow to the efforts of the victims’ family to ensure that peoples’ interest and attention will not wane.

“This is a public interest case not just for us but for the international community as well and the SC should have allowed its live coverage and promote transparency in the trial of such a heinous crime. We urge the court to reconsider its decision,” Colmenares said. 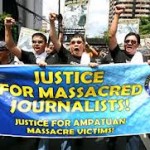