Prince William, Duke of Cambridge and Catherine, Duchess of Cambridge took the unprecedented step of suing a French magazine and its publisher over topless pictures which they regard as unwarranted intrusion of their privacy.

The French magazine Closer which is owned by a firm run by the daughter of Silvio Berlusconi, the former Italian prime minister, claimed the pictures were taken from a public road from which the house and its swimming pool were visible. It printed a series of photographs of the Duchess sunbathing in Provence last week.

The couple were enjoying a short break at the Chateau D’Autet, owned by Lord Linley, the Queen’s nephew, in Luberon, when the pictures were taken.

The Duchess is seen looking relaxed and happy in the pictures as she wears nothing but a pair of bikini bottoms, while William is in a pair of shorts.

Closer claimed the swimming pool was in full view of a public road, and sources in the area have said that even local French newspaper photographers who have nothing to do with the international paparazzi were able to stand on the road and take pictures.

The Duke and Duchess made no attempt to conceal their fury in a statement released by St James’s Palace yesterday morning, saying they had ‘every expectation of privacy’ in the remote Chateau, and that publication of the photographs was ‘unthinkable’.

Traditionally, the Royal family never take legal action against the media, but the pictures are perhaps the most intrusive ever published of a senior member of the Royal family.

It is the first time a senior member of the Royal family has sued in a foreign court to protect their privacy.

Diana, Princess of Wales was the last senior member of the Royal family to begin legal proceedings for breach of privacy, when she sued the owner of a gym for selling pictures taken using a concealed camera.

The case however, was settled out of court, meaning that if the Duke and Duchess’s case goes before a judge, they will be setting a precedent and it will be the first time any such hearing has taken place. 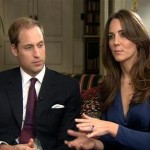