The Senate and the House of Representatives are expected to confirm the proposed national budget next week before submitting it to President Benigno Aquino III for signature.

The ₱54 billion increase in the education budget aims to address the shortages in education resources like classrooms, teachers and textbooks, according to Sen. Franklin Drilon.

The ₱44.25 billion allocation for the Conditional Cash Transfer (CCT)program highlights the budget allotted for social services along with the education and health care program of the Department of Health, according to the Iloilo legislator.

The 2013 budget also provides ₱12.6 billion for the enrollment in PhilHealth of 5.2 million poor families.

The non availment of Senator Panfilo Lacson of his priority development assistance fund (PDAF) as per his request, thus reducing the budget by ₱100 million. 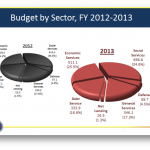