World number one golfer Rory McIlroy won the BMW Championship, claiming his second victory in a PGA Tour within the seven days span with a stunning final round of 67.

The Northern Irishman finished 20 under in Indiana, two shots clear, and looked in superb form with the Ryder Cup less than three weeks away.

McIlroy can rightly feel very proud when looking at a leaderboard that saw him win by two strokes from Phil Mickelson and Lee Westwood, with Tiger Woods among those tied third.

Two-time play-off winner Woods, who will come up against McIlroy when the USA face Europe in Medinah, Illinois in the Ryder Cup at the end of the month, shot a back-nine 33 in a four-under final round of 68.

Woods, never a serious threat to the lead, finished three off the pace after a 68. He was tied for fourth with Robert Garrigus (69).

Mickelson, who shared the overnight lead, was one stroke off the pace before a bogey at 12. Two late birdies pulled him within two, but he missed a three-footer (just under a meter) for par at 17 to fall back again.

Overnight leader Vijay Singh fell away with a one-over 73 in his final round, leaving the veteran still searching for his first Tour win since 2008.

But Tour success is not in short supply for world number one McIlroy, who combined long and straight drives with composure on the greens to register his seventh top-three finish of 2012, and fourth victory.

McIlroy has already won one of the four PGA play-offs this year last week’s Deutsche Bank Championship and will be among the 30, including Woods and Westwood, who will reconvene at Eastlake in Atlanta, Georgia on Thursday, 20 September for the final event of the series. 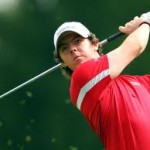