World no. 1 Rory McIlroy took an impressive 4-under 67 in the final round to win the Deutch bank title.

McIlroy edges Louis Oosthuizen of South Africa by one shot when the latter made a par 71 in the final round.

Despite with McIlroy’s strong start, Oosthuizen, who battled a pulled muscle for much of the round, didn’t go down without a fight.

The South African birdied the 13th and 15th to cut the lead to one with three holes to play, but when his birdie putt slid by the hole on the 18th he had to settle for a second-place finish and a spot on the list of 54-hole leaders to squander a sizable lead in the final round this season.

Former world no. 1 Tiger Woods carded a bogey free 66 to finish just one shot behind Oosthuizen on 18 under four clear of Phil Mickelson and Ryder Cup hopeful Dustin Johnson who shot a 66 and a 70 respectively in the final round.

McIlroy’s victory, his fifth on the PGA Tour saw him ahead of American Nick Watney at the top of the FedExCup rankings with just two tournaments to go and the first prize is within his reach when it is settled at the Tour Championship in Atlanta the weekend before Europe and the US do battle at Medinah later this month. 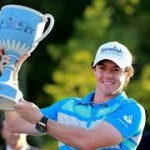