Rory McIlroy’s victory in the US PGA Championship at Kiawah, was indeed a remarkable feat for the Northern Irelander after having missed two successive cuts prior to playing this tournament.

The 23 year old former US Open champion has just won his second major and the performance took him back to the world number one ranking and convincingly he did when he finished on 13 under taking away the lead from earlier leader Carl Pettersson of Sweden.

Most people have thought that McIlroy second round blip of 75, was yet another disappointment that was difficult for him to recover but amazingly he did a superb come back when he scored a five under 67 in the third round and finally a brilliant performance when he played almost flawless golf in the final round carding a six under 66 that sealed his victory for his second major after winning his first major title of last year.

Refreshing McIlroy’s previous majors’ performance, he won his first major with a brilliant eight shot lead victory over Jason Day of Australia in the 2011 US Open, now he replicated the same feat at the 2012 US PGA Championship, when he registered also an eight shot lead over English golfer David Lynn, his nearest competitor this time, to win his second major.

In the tournament, McIlroy was perhaps the only one of the top six not to drop a shot during his final round.

When he did find himself in a bit of trouble he accordingly made an adjustment to produce two standard recovery shots to offset those lapses. Undoubtedly, it was one of the key to his victory. 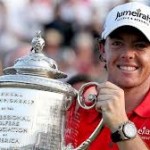