World no. 3 Rory McIlroy carded a five under 67 in the first round of the US PGA Championship at Kiawah Island, South Carolina.

Dutchman Joost Luiten reached eight under after 14 holes but bogeyed the last four to card a 68. Defending champion Keegan Bradley with John Daly, who won the tournament in 1991 also opened with a 68 to lie four under.

Graeme McDowell together with Aaron Baddeley, Adam Scott, K.J. Choi and Canadian Open champ Scott Piercy to be part of a group who finish at four under 68.

World no. 2 Tiger Woods, Wales’s Irish Open champion Jamie Donaldson, and Justin Rose who both shot a three-under-par round of 69.

It was a miserable day for world no. 4 Lee Westwood, who shot five bogeys, while world no. 1 Luke Donald did not fare much better a double bogey on the 17th, where he ended up in the water, seeing him finish two over.

US PGA First Round Leaderboard: 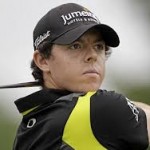