She needed just 63 minutes to defeat Sharapova, who also was attempting to win the Golden Slam after completing the Grand Slam earlier this year with a win at the French Open.

Williams, who won the Wimbledon title last month, returned to the courts of the All England Club for the Olympics and played six singles matches in the tournament.

The 30-year-old had won the last seven matches she played against Sharapova, who will take home the silver medal while world number one Victoria Azarenka of Belarus bronze.

The Saturday’s meeting was the 11th between Williams and Sharapova and Williams now holds a 9-2 advantage. Sharapova’s only two victories in the series came in 2004.

The American player, 30, has lost just five games in the three Olympic finals she has won: 2000 Sydney doubles, 2008 Beijing doubles and 2012 London singles.

She jumped up and down with delight as she clinched the women’s singles Olympic title. 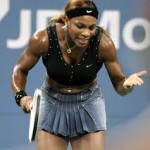