Senate ways and means committee chaired by Senator Ralph Recto bared a new version of the sin tax that promises to generate P15 billion to P20 billion in revenues from tobacco and alcohol products in its first year alone, which is lower than the projected P31 billion in the House of Representatives version.

The Malacañang endorsed sin tax bill would not only generate revenues for the government but also strengthen the country’s health care system. It is authored by Cavite Representative Joseph Emilio Abaya, who has restructured alcohol and cigarette taxes.

However, the Senate ways and means committee’s version opts to cut down the incremental taxes on lower priced cigarettes to a mere 121 percent hike compared to the 200 percent proposed by the House.

Flavier, 77, said that imposing higher taxes on cigarette products is “justified and realistic considering it had been 16 years that sin taxes were based on tobacco products’ 1996 retail prices.”

“The sin tax bill as originally proposed would have moved us forward. Recto’s version keeps us all in the same place. There is also a preponderance of evidence worldwide that higher taxes achieve two things: they reduce the incidence of smoking by raising prices, and they raise more revenue that we can hopefully plow into healthcare. If you water down the rates, the twin benefits are diminished,” he said.

Flavier told the senators to pass the sin tax bill but “make sure it will achieve its desired effects.” He claimed this is not likely to happen if the legislators will support Recto’s proposal.

Flavier reminded solons that the sin tax is first and foremost an anti cancer tax, a measure that intends to save the country from a possible lung cancer epidemic brought by a high smoking population and the availability of cheap cigarettes.

The World Bank and the World Health Organization are recommending a 70 percent excise tax on the retail price of cigarettes to achieve a two million reduction in the number of smokers by 2016. 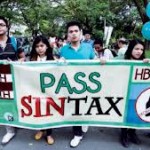