The reinstatement of Emilio A. Gonzales III as Deputy Ombudsman for the Military and Other Law Enforcement Office (MOLEO) by the Philippine Supreme Court after he was dismissed by the Office of the President (OP) due to gross neglect of duty and grave misconduct has tested the independence of the High Court when it ruled out against the OP’s decision.

The dismissal of Gonzales arose when a dismissed policeman who perpetrated the 2010 Manila hostage-drama that left eight Hong Kong tourists dead, had identified Gonzales as among those accountable for the crisis by the Incident Investigation and Review Committee, chaired by Justice Secretary Leila de Lima and vice-chaired by then Interior and Local Government Secretary Jesus Robredo .

The reinstatement order came via a unanimous vote, where the SC justices ruled that grave abuse of discretion was committed on the part of the OP when it dismissed Gonzales in 2011.

The Supreme Court En Banc has unanimously ordered the reinstatement with full back wages of Gonzales.

In its 50-page consolidated decision, the Court ruled that the OP’s pronouncement of administrative accountability against petitioner Gonzales and the imposition upon him of the corresponding penalty of dismissal must be reversed and set aside, as the findings of neglect of duty or misconduct in office do not amount to a betrayal of public trust. Hence, the President, while he may be vested with authority, cannot order the removal of petitioner as Deputy Ombudsman, there being no intentional wrongdoing of the grave and serious kind amounting to a betrayal of public trust.

Nonetheless, the Court deemed it appropriate to refer the case to the Office of the Ombudsman for further investigation of the charges against Gonzales. 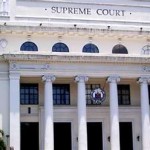