There must be a good reason why Ombudsman Conchita Carpio Morales has to cheer up these days over the result of a survey conducted by the Makati Business Club (MBC).

The Office of the Ombudsman garnered the highest point of increase in perception rate, of government performance second only to the Department of Tourism (DOT).

That shows up the confidence level of Juan de la Cruz for the office of the Ombudsman has started to pick up by moving the agency from its previous standing of 44th place, now to its current 18th place which could be an amazing accomplishment at 26 notches higher.

The abrupt increase only shows that under the leadership of Ombudsman Morales, the Filipino people has complete confidence in her leadership in going after scalawags in the government.

With P-Noy spearheading his platform of ‘matuwid na daan’ (straight path) that installed him to power in a landslide 2010 presidential election victory, there’s no doubt that the Filipino people approved his platform of change.

And the office of the Ombudsman is the appropriate government agency to carry out the platform of P-Noy as the agency is mandated by the Constitution to investigate, to build up a case and to charge against those perpetrators of wrongdoing in the government.

With Morales at the helm of the graft buster agency she brought with her vast judicial experience and unwavering integrity for having serve the government for 40 years with untainted record.

The survey of the MBC is aimed at measuring the level of perception in the performance of government agencies. 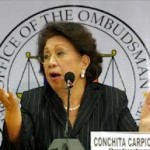