There is a lesson to be learned that there can still be ‘harmony in diversity’ if only as a people we know how to acknowledge and respect each other differences.

Being different to one other in terms of culture, belief, social and political orientation should not be an obstacle why we couldn’t live together in peace.

Under the principle of ‘one country two systems’ like what occurred between Hong Kong and China, there’s no reason why we couldn’t adopt their system for the sake of peace.

Despite the establishment of the Autonomous Region for Muslim Mindanao (ARMM), lasting peace in Mindanao has continued to be a dream, because the core to the problem has not been properly addressed by the previous government administrations and who also failed politically to correct them.

President Aquino, in his speech announcing the forging of the framework agreement in Malacañang said:

“We have counted two generations since conflict began in Mindanao, a cycle of violence that has claimed the lives of more than a hundred thousand Filipinos. Many solutions have been proposed and tried. We have had peace agreements in the past, but still our hopes for the region remained unfulfilled. The ARMM (Autonomous Region in Muslim Mindanao) is a failed experiment. Many of the people continue to feel alienated by the system, and those who feel that there is no way out will continue to articulate their grievances through the barrel of a gun.”

He said the framework agreement “seeks to correct these problems. It defines our parameters and our objectives, while upholding the integrity and sovereignty of our nation.”

The agreement also creates a new political entity, the Bangsamoro, which symbolizes and honors “the struggles of our forebears in Mindanao, and celebrates the history and character of that part of our nation,” he added.

Under the new deal expected to be signed on Oct. 15, in Malacañang, the rebels shall be accorded a larger share of power and wealth in a new autonomous region by 2016, known as Bangsamoro superseding the ARMM. 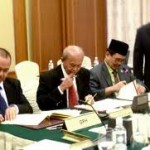