President Barack Obama has warned Syrian President Bashar al-Assad yesterday not to use chemical or biological weapons in his country’s bloody conflict against his own people and suggested that such action would prompt the US to consider a military action against those who would be responsible.

There would be ‘enormous consequences’ if Assad failed to safeguard his weapons of mass destruction, the US president has warned.

It was Obama’s strongest language so far on the issue, and he warned Syria not only against using its unconventional weapons, but against moving them in a threatening fashion.

Obama told an impromptu White House news conference. He acknowledged he was not ‘absolutely confident’ the stockpile was secure.

Syria last month acknowledged for the first time that it had chemical and biological weapons and said it could use them if foreign countries intervene, a threat that drew strong warnings from Washington and its allies.

Obama said the weapons worried not only Washington but also its allies in the region, including Israel.

The US president has been reluctant to get the United States involved in another war in the Middle East, and refuses to arm rebels fighting a 17-month uprising against Assad, partly out of concern that some of those fighting against the Iranian-backed president are Islamist radicals equally hostile to the West.

When asked whether Obama envisioned the possibility of using U.S. forces at least to safeguard Syria’s chemical arsenal, he said: “We’re monitoring that situation very carefully. We have put together a range of contingency plans.”

Seeking re-election in November, Obama noted that he had refrained ‘at this point’ from ordering U.S. military engagement in Syria. But when he was asked at a White House news conference whether he might deploy forces, for example to secure Syrian chemical and biological weapons, he said his view could change. 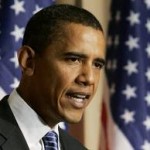