The National Grid Corporation of the Philippines (NGCP) reported that among the 13 transmission lines that tripped, eight were 69-kV lines while five were 138-kV lines.

According to NGCP, the Zamboanga Peninsula was cut off from the power grid after the Agus 5-Aurora 138-kV line tripped.

The Zamboanga Peninsula, Misamis Occidental and part of Lanao del Norte were among the areas affected.

Milfrance Capulong, NGCP Mindanao Corporate Communications officer, said that only the electric cooperatives or the distribution utilities (DUs) in the specific cities or municipalities in the region would know how many homes experienced power interruption, noting that they ‘are only doing power transmission services’.

The DU allots the available power within its franchise area and implements the power interruption schedule among the end-users, the power grid operator said.

The NGCP also ensures the availability of hardware materials and supplies necessary for the repair of facilities as well as the positioning of line crews in strategic areas to facilitate immediate restoration work as soon as the weather allows. 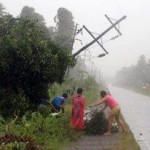