According to Benito Ramos, executive director of NDRRMC, that at least 3,406 people, 133 rolling cargoes, 87 vessels and 48 motor bancas were stranded all over the ports of the country.

Meanwhile, NDRRMC said that Tuesday classes in all levels were suspended in Mandaue City in Cebu; Cebu City; Dumaguete City; Caraga Region; and all places in Region 11 under storm warning signal number 2 and 3.

Classes from pre-school to high school were suspended in Davao City.

Some 972 evacuation centers have been set up, while 81 personnel, 12 vehicles, 60 seacrafts and 35 aircrafts were readied for typhoon Pablo, he said.

PAGASA said 15 to 30 millimeters per hour of rainfall is expected within the 600-km diameter of the typhoon, which is still classified as ‘heavy to intense.’

Typhoon Pablo has maintained its strength and is moving west at 26 kph and is expected to be at 180 km southwest of Roxas City by Wednesday morning.

If ‘Pablo’ maintains its present speed, PAGASA said it will likely exit the Philippine area of responsibility (PAR) via the West Philippine Sea either Thursday evening or Friday morning. 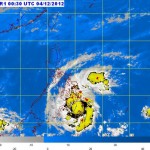