The American pairs of Phil Mickelson-Keegan Bradley and Bubba Watson-Webb Simpson took three of the four points on offer after lunch to open up a commanding advantage.

Mickelson and Bradley won both their matches together as the United States stormed ahead 5-3 over defending champion Europe in the first day of the 39th Ryder Cup on Friday.

The two teams had been tied 2 -2 after the morning foursomes, with the Northern Irish pairing of Graeme McDowell and Rory McIlroy picking up Europe’s first point and Ian Poulter and Justin Rose providing the second.

Nicolas Colsaerts Belgium’s first player to appear in the match produced an incredible eight birdies and an eagle for the European team in the final fourball game to keep the American team lead down to 5-3.

Colsaerts paired with Lee Westwood was instrumental in saving the European team from being whitewashed in a session for the first time since 1981.

Tiger Woods and Steve Stricker were beaten in the morning as Justin Rose and Ian Poulter won 2 & 1.

Woods still paired with Steve Stricker played far better and was close to producing a three-birdie finish that would have snatched a half, but he was no match for the inspired Colsaerts.

The former world no. 1 who had struggled badly in the morning, made five birdies in the last nine holes to give the Americans a faint chance of winning but he narrowly missed a 15-footer at the last to hand the Europeans their only point of the afternoon.

Bradley and Mickelson earned the first point by beating Britain’s Luke Donald and Spaniard Sergio Garcia 4 & 3, then a second when Zach Johnson and Jason Dufner defeated Westwood and Francesco Molinari of Italy 3 & 2.

McIlroy and McDowell came through for Europe when they edged Jim Furyk and rookie Brandt Snedeker one up after a fluctuating battle in the opening match. 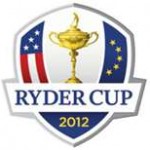