A new book about the Beatles entitled, “Come Together: The Business Wisdom of The Beatles,” is all about the history of the fabulous four of being together and what makes them tick.

The book authors, Richard Courtney and George Cassidy embark on the idea treating successes and failures of the Beatles as an inspiration not only for aspiring bands and rock stars but for every business people as well.

As self starter, the Beatles only mode of transportation was a van missing its windshield. That meant that in the dead winter, band members who were not driving huddled on top of one another for warmth, the authors write, adding: “Take a page out of their book. Although frostbite is generally a bad idea, avoid relying heavily on debt to finance your daily operations or growth.”

The Lennon-MCartney decision to always share credit on song provided another lesson, the authors suggest: Don’t waste time arguing over crumbs when that energy could be better used building a bakery, or in this case, the Beatles songbook.

Another story from the Beatles’ early years highlights the importance of heeding feedback. Executives at Capitol Records, the American affiliate of EMI, passed on, ‘Love Me Do.’

The Beatles could have kept arguing about the album’s merits or simply giving up on conquering America. Instead, they kept recording new material and sending it to Capitol for one solid year. Finally, in 1964, Capitol released ‘I Want To Hold Your Hand,’ which became the Beatles’ first No. 1 hit in the United States.

“The most important lesson here is not simple perseverance, though that is important,’ the book says. The approach was key. They did not continue to pitch Capitol the same product that they had already rejected.” Instead, George Martin, the Beatles’ producer, got in touch only “when he had something new and improved.” 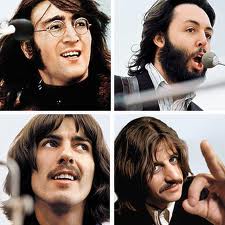