Speculations are rife that once the Philippine version of sin tax law is implemented there will be a decrease in the consumption of alcohol and tobacco in the country.

However, if they are individuals’ vices and personal lifestyle’s preferences these are the group of people who never seem to bother any increment that is levied on the goods they are buying as long their needs are sustained.

To the alcoholics and smoking addicts they are going to continue their usual habits and the raising of sin tax on tobacco and alcohol is never be a deterrence to their caprices.

The Philippine government had initiated the reform of the sin tax to upgrade the system and generate enough funds to address the growing number of health related cases to smoking and drinking.

Besides, our Asian neighbors Thailand, Malaysia, Singapore and Indonesia have long time upgraded and reaped the benefits from the sin taxes on alcohol and tobacco.

With the reform law now in place for implementation, the government is now expecting a boost in revenues from the sin tax products with an expected notable slow down of some group of people patronizing them because of budgetary constraint.

The government intention to protect the health of the citizenry is noble especially children at a young age who could be exposed to the ill effects of smoking and drinking.

According to nutritional experts, alcohol (7kcal/g) is second only to fat (9kcal/g) in terms of calorie content and has no any nutritional value.

A glass of wine is equivalent to 178 calories and it will take an alcohol drinker more than a half hour’s brisk walk to burn off.

Kate Mendoza, head of health information at World Cancer Research Fund (WCRF), said: “Cutting down on drinking can have a big effect on weight loss or maintaining a healthy weight.”

It can also reduce your risk of cancer, as alcohol is linked to breast, bowel, mouth and liver cancer, she said.

Meanwhile, the British government has launched a graphic anti-smoking advertising campaign, which features a cigarette with a tumor growing from it, and as many smokers prepare to quit as part of their new year resolutions

The British Journal of Psychiatry in their study has found a ‘significant’ decrease in anxiety levels among the 68 smokers who had quit the habit despite the belief that smoking relieves stress, researchers say.

The researchers drawn from several universities including Cambridge, Oxford and Kings’s College in London, said the findings should be used to reassure smokers attempting to quit that concerns about increased anxiety levels were unfounded. 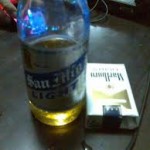