Data show Southeast Asia hosts about a third of global mangrove area totaling some 14 million to 15 million hectares at present.

Such mangroves are the most diverse in terms of flora and fauna composition with 18 plant species being endemic to the region.

Experts noted mangroves are a group of salt-tolerant plants that occupy the inter-tidal zone of sheltered coasts around estuaries and lagoons.

Aside from serving as nesting and foraging ground for various species, they said mangrove areas are sources of wood and non-wood products.

Southeast Asian nations are boosting efforts to save this region’s mangrove areas from further destruction and decline.

He noted funding allocation in Thailand and the Philippines for respective mangrove R&D activities are way below UNESCO’s recommendation of at least one percent of gross national product.

The countries’ allocation are only about 0.26 percent and 0.12 percent, respectively while developed countries’allocation is at two percent, he reported.

Panay and Guimaras islands are the ZSL’s community-based rehabilitation project in the Philippines and has yielded significant lessons for enhancing efforts to regenerate mangroves.

Among such lessons are shifting mangrove planting activities from seafront sites to abandoned ponds when possible.

Lessons learnt from the project will help improve mangrove reforestation in the Philippines where the standard practice is to plant bakhaw propagules in seafront sites that are selected during spring low tides, according to Primavera.

Authorities concerned earlier decided to hold the congress so that ASEAN experts can discuss the latest R&D information on mangrove resource management across Southeast Asia. 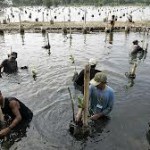