Cheap imported handheld x-ray device known as the Tianjie Dental Falcon from China, could expose patients to ten times suggested levels of radiation, increasing their risks of cancer and organ damage, according to UK’s Medicines and Healthcare Regulatory Agency (MHRA).

So far, 13 of the machines, sold on internet sites including eBay by a Chinese manufacturer, have been seized at a distribution center.

Barry Cockcroft, chief dental officer for England and the Government’s principal dental adviser, added: ‘It is vitally important that when buying equipment, dentists make sure it is appropriate and safe for use.

‘I would urge all dental professionals to be cautious of seemingly cheap devices which may not be fit for purpose and potentially dangerous.’

The machine’s X-ray beam is also too wide, which means a patient’s whole skull and brain is exposed to radiation rather than just their mouth.

Scientist Donald Emerton, who tested the device, said: “Over time someone operating this machine, such as a dental assistant, would be exposed to unacceptable levels of accumulated radiation and this would have an increased risk to their health.

Emergency testing of the product by the Health Protection Agency and scientists at King’s College Hospital in London revealed that it has insufficient lead shielding inside it to protect dentists and patients from excessive radiation.

Bruce Petrie, of the MHRA’s Medical Devices Enforcement Team, said: “It’s vital that dentists and dental staff do not buy these dental X-ray machines from eBay or other websites because they are not approved and not safe for dentists or patients. 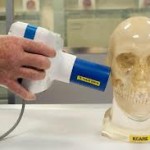