The recognition adds another feather to the PPUR string of national and international recognitions as a National Park, National Geological Site, ASEAN Heritage Park, UNESCO Biosphere Reserve, World Heritage Site and as one of the New 7 Wonders of Nature.

The Ramsar Convention is a treaty among 163 countries aimed toward the conservation and wise use of wetlands. Wetlands are on the Ramsar list because of their ecological, botanical, zoological, limnological or hydrological importance.

PPUR was cited for the importance of its bio-diverse ecosystem and the conservation efforts for its sustainable development, with the unveiling of the marker at the actual site.

The unveiling rites were led by Department of Environment and Natural Resources (DENR) Secretary Ramon Paje, City Mayor Edward S. Hagedorn, along with a Ramsar official.

The Philippines being a member country will be planning and overseeing a framework to conserve a declared Ramsar site to maintain its ecological character.

DENR Secretary Ramon J.P. Paje said that ‘the designation of this national park as a Ramsar site will further cement its status as an eco-tourism destination,’ but warned that the number of visitors coming to the Underground River, which saw an exponential growth since its inclusion in the Seven Wonders of Nature, could ‘threaten the integrity of the natural habitats or the survival of the wildlife species that tourists have come to enjoy.’

Paje calls to the stakeholders to work hard to ensure that necessary policies and guidelines are passed. He said these policies should ‘clearly define the ‘eco’ in eco-tourism as more ‘ecology’ and not simply ‘economy.’

The DENR Secretary urges everyone involved to welcome these responsibilities as they are ‘necessary to the preservation [of the PPUR] not only as a top eco-tourism destination but also as a habitat for biodiversity.’

The park is home to about 800 plant and 233 animal species, many of which are the critically endangered, and 15 endemic species of birds.

PPUR was nominated to the Ramsar Convention by the DENR through its Protected Areas Wildlife Bureau in February this year as a highlight to the celebration of February 2 as World Wetlands Day. 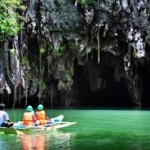