Article II Section 26 of the 1987 Philippine Constitution clearly prohibits political dynasty but it has yet to come up with an appropriate definition by enacting a law through Congress.

The question is, how can Congress do the same when they members are the ultimate beneficiaries of political dynasty that they mostly come from certain dominant political clan?

How can Congress then dominated by political dynasties ever craft an implementing law against them?

Legislators have yet to begin discussions on political dynasties and should come up at least with a definition, that could serves the welfare and interest of the Filipino people.

The current characteristic of Philippine political landscape, leaves to few influential clans the control of a particular locality from provincial down to barangay level which should not be allowed because of its monopolistic reality that corruption in government usually resides.

Senate Bill No. 2649 filed by Sen. Miriam Defensor-Santiago, political dynasty exists when the spouse of an incumbent elective official or relative within the second degree of consanguinity or affinity holds or runs for an elective office simultaneously within the same province or occupies the same office immediately after the term of office of the incumbent official.

“It shall also be deemed to exist where two or more persons who are spouses or are related within the second civil degree of consanguinity or affinity run simultaneously for elective public office within the same province, even if neither is so related to an incumbent elective official,” the bill said.

Political dynasty per se is not that bad as long there will be no deliberate intention or monopolistic tendencies by politicians, political families or relatives to absolutely control power by depriving others the opportunity to aspire on even terms with them in the political arena.

The problem with political dynasty is when it becomes a family affair and the politician themselves treat it as a family business. It is when political expediency reigns over at the expense of the public good and interest. 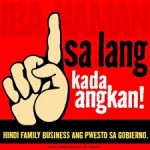