The world was in shock upon learning the death of Steve Jobs, Apple co-founder and former CEO, who spearheaded and revolutionized technology at our fingertips through inventions of Apple’s trademark, the iPad and iPhone.

He has been hailed as one of the greatest innovators of our time who unselfishly wants to change the world to be a better place to live through the advancement of technology.

Jobs’s family also issued a statement, saying that “In his public life, Steve was known as a visionary; in his private life, he cherished his family,” it said.

He had lost in his long battle with pancreatic cancer surrounded by his relatives.

Tributes flowed in from around the world for Jobs, while Apple fans flooded social networking sites to voice their sorrow over the passing of the man who helped put mini computers in the shape of phones in millions of pockets.

In President Obama’s words, “Steve was among the greatest of American innovators, brave enough to think differently, bold enough to believe he could change the world, and talented enough to do it. … By making computers personal and putting the internet in our pockets, he made the information revolution not only accessible, but intuitive and fun.”

Tim Cook, who had been handling Apple’s day-to-day operations since Jobs went on medical leave in January, and was made chief executive officer in August after his resignation, led the praise for the Silicon Valley legend.

“Steve leaves behind a company that only he could have built, and his spirit will forever be the foundation of Apple,” he said in a statement. 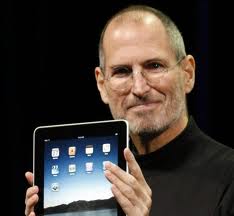