The existence of the nightly bug munching bats saves the United States agriculture between US$ 3.7 billion dollars to US$ 53 billion dollars annually on pesticides and crop losses.

Bats are efficient insect controller and researchers are worried that they are dying off in large quantities because of a fungal disease known as white nose syndrome.

It has wiped out over 70 percent of the bat populations in some of the 16 states and 3 Canadian provinces where it has been found.

The fungal disease is spreading west from New York, where it was discovered, into areas with higher agricultural outputs like the Midwest.

Bats in the Midwest are already getting clobbered by wind turbines. The energy producing turbines cause air pressure changes that damage bat lungs. They also smack the flying mammals out of the sky with their rapidly spinning blades.

White nose syndrome and wind turbines are giving the bats a one-two punch, that could result in serious economic consequences within the next five years, if the death rate continues unabated.

“We hope that our analysis gets people thinking more about the value of bats and why their conservation is important,” said Gary McCracken, a University of Tennessee professor and co-author of the study.

“The bottom line is that the natural pest-control services provided by bats save farmers a lot of money,” McCracken said. 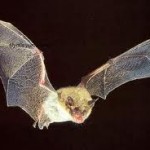