Contrary to popular belief, belly dancing doesn’t involve only the belly in its movement. The entire body moves in the dance and it has evolved from traditional forms to heart pumping work-outs.

Its a form of exercise that any adult, regardless of age, gender, weight, agility and knowledge of dance steps, can participate in.

This is something that serves as an excellent alternative for people who don’t normally like going to the gym. One thing is sure though, belly dancing can be highly addictive.

Belly dancing is low impact(the risk of injury is minimal when the dance movements are done correctly). The most distinguishing feature of belly dancing is the isolated motions of the abdomen.

These circular, rolling, angular and vibrating movements are all based on natural body movements and it is exactly that makes belly dancing such a safe form of exercise for people of any age.

The flowing movements of hip drops, rolls, pivots that are done during belly dancing use the muscle groups in the abdomen, pelvis, spine and neck.

During belly dancing, the joints and ligaments in your lower back and hips are put through a full range of gentle repetitive motions. Don’t you know that belly dancing can prevent pregnancy pains?

The movements of the dance mimic the childbirth process and teaching mothers how to move their pelvises. Pregnant mothers also find that belly dancing helps relieve them of back pain and keep their body supple.

While shimmies should be avoided during pregnancy, the figure eights and rolling circular movements are good preparation for childbirth; they assist the normal pelvic relaxing process to prepare for birth and at the same time, helps firm the pelvic muscles for labor and post pregnancy recovery.

A woman’s body also gets into shape faster after a natural birth if the woman has been belly dancing both before and after giving birth, because the emphasis on muscle control helps encourage abdominal tone.

Post birth incontinence(inability to control of urine) is also avoided due to strong pelvic floor muscles. The gentle repetitive movements of belly dancing helps lessen the pains of pre-menstrual syndrome(PMS) and cramps during the periods of women of childbearing age by stimulating blood flow to the lower regions of the body.

The relaxation that belly dancing gives to its practitioners help them deal with stress, which a major contributing factor to pre-menstrual syndrome. It is also considered to be a weight bearing exercise since a dancer is on her feet, constantly moving all throughout.

Weight bearing exercises can help prevent osteoporosis(calcium deficiency) and increase bone density. It can also burn up to 300 calories/hr. depending on the intensity of your dancing.

Closely related to stress release is the deep breathing results in better oxygenation of the blood, which helps us eat and sleep better, and slows down the aging process.

Physical therapists and doctors who have known this dance recommend belly dancing because of its suppleness and fluidity of movement that can help relax and lubricate joints and can be helpful in cases of arthritis, particularly in the wrists and shoulders.

There are some emotional benefits that can be derived from belly dancing. It has been noted that it can free your mind from stress and tension.

The subtle rhythm, repetitiveness of the dance allows you to let go of other concerns, inducing a state of mental relaxation that gives you breathing room in your mind. It has been also noted that it can boosts self esteem and gives you a feeling of empowerment. 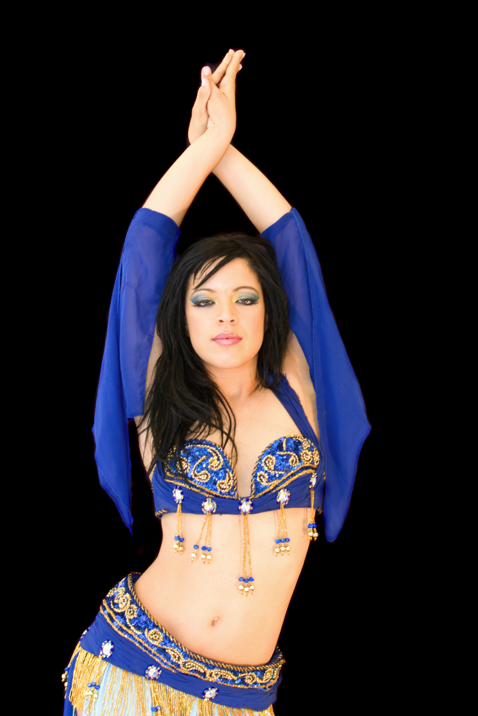