Henry Cooper is the former British, Commonwealth and European champion and is revered for his 1963 knockdown of Muhammad Ali,then Cassius Clay.

He died at the age of 76 at his son’s house in Oxted, Surrey. In a statement, Ali said he would miss his “old friend”, calling him “a great fighter and a gentleman”.

After an amateur career that included an appearance as an 18-year-old in the 1952 Helsinki Olympics, Henry Cooper and his twin brother George, who died last year, both turned professional at 20 in 1954.

He went on to enjoy a hugely successful professional career, but never won a world title and retired, aged 36.

In 1971 after losing to Joe Bugner, a year after he became the first person to be named as BBC Sports Personality of the Year on two occasions (1967 and 1970).

Cooper, who is the only British boxer to have won three Lonsdale belts outright, is best remembered for his two famous clashes with Ali in the 1960s.

Alongside Frank Bruno, Tommy Farr and Lennox Lewis, Cooper is considered one of the great British heavyweights in boxing. 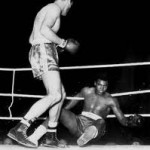