Camilla has made it clear that she intends to be known as Princess Consort should Prince Charles outlive his mother and become King.

The Duchess of Cornwall doesn’t want to become Queen because of the sensitivity connected with the memory of Princess Diana, despite the fact that legally she will become Queen should Charles take the throne.

In the same way, senior royal sources say Prince Charles’s wife is technically the Princess of Wales, but chooses not to go by that title again because of the sensitivities associated with Diana.

It is widely believed that Prince Charles does not want his wife to be remembered as being deprived of the title.

When Charles and Camilla married in 2005, the Royal Household said it was convention that the wife of a King was known as his Queen.

Despite her insistence, earlier this year Camilla did nothing to quash rumors she still wanted to be Queen when an eight-year-old girl asked her: ‘Are you going to be Queen one day,’ and she replied: ‘You never know.’

The Duchess has recently impressed many with her willingness to publicize good causes and engage with the public. 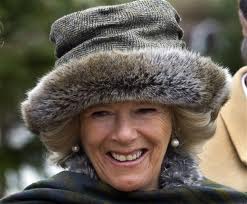