Osteoarthritis’ exact cause remains unknown, but it is generally thought to stem from aging and wear and tear on joints, exacerbated for some by genes.

Overweight or obese people have greater arthritis risk, usually attributed to the load their joints carry, and the number of cases is increasing as people live longer and weigh more.

In one region of the northern United States, research over the past 50 years has shown that poor nutrition early in life led to arthritis in more than 50 percent of the moose studied.

Collecting bones of more than 4,000 moose, researchers discovered that out of 1,200 carcasses they analyzed, more than half had arthritis, virtually identical to the human kind.

Scientists say that some people’s arthritis can also mean to be linked in part to nutritional deficits in the womb and possibly throughout childhood.

The moose conclusion bolsters a growing body of research connecting early development to chronic conditions like osteoarthritis, which currently affects 27 million Americans, up from 21 million in 1990.

Studies of moose on Isle Royale in Lake Superior, along with human research, suggests arthritis origins are more complex, probably influenced by early exposure to nutrients and other factors while our bodies are developing.

Even obesity’s link to arthritis probably goes beyond extra weight, experts say, to include eating the wrong things. Nutrients, expert say, might influence the composition or shape of bones, joints or cartilage.

Nutrition might also affect hormones, the likelihood of later inflammation or oxidative stress, even how a genetic predisposition for arthritis is expressed or suppressed.

However, studying nutrition in people is much more complicated than in moose Dr. Rolf Peterson, a Michigan Technological University scientist on the Isle Royale project which began in 1958, has said, that the early moosehood development window occurred in utero through 28 months, but humans developmental time frame lasted into the teens.

Some experts say prenatal nutrition is most critical; others see role for nutrients after birth and beyond. 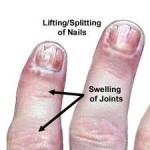