China will publicize an upgraded national standard that offers strict guidelines in the safe use of food additives by end of 2011, according to the circular.

In a statement issued by the State Food and Drug Administration (SFDA), it has also urged to tighten supervision in the use of food additives and flavoring materials in restaurants and snack bars.

Use of any food additive or flavoring that are not certified or bear no standard information as to its manufacturers, or overuse of such materials, are prohibited, the SFDA said.

In a related development, China on Wednesday publicized a regulation that sets limits of melamine levels in food products.

Infant food products, in which levels of melamine, a toxic chemical normally used in manufacturing plastics, is higher than 1 milligram per kilogram of food, are prohibited from sale in China, the regulation said.

In other food products, the maximum tolerable level of melamine is 2.5 mg for per kg of food, said the regulation, issued by Chinese Health Ministry along with other government agencies.

These moves came after a recent series of food safety scandals emerged despite Chinese authorities’ efforts to revamp the country’s food industry.

Last week, steamed buns in Shanghai were reported to have been dyed, past the due by date or laced with coloring additives to mislead consumers.

Less than one month ago, the country’s largest meat processor, Shuanghui Group, was forced to publicly apologize after some of its pork products were found to contain clenbuterol, an additive which stops pigs accumulating fat and is poisonous to humans.

In 2008, China’s food industry suffered a heavy blow when milk products were found to contain dangerous levels of melamine, which were intentionally added to make milk appear to be protein-rich. The toxic milk killed at least six babies and sickened 300,000 others across the country. 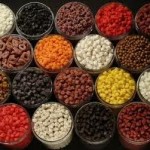