Raymond Chow, the Hong Kong producer who was responsible in introducing Bruce Lee and Jackie Chan into the big screen and international audience, will be honored for lifetime achievement at the fifth Asian Film Awards ceremony.

Chow worked at the famed Shaw Brothers studios before leaving to found Golden
Harvest in 1970. The 83-year-old filmmaker was “instrumental in making Asian cinema the global cinematic and box office force it is today,” according to the organizers of the Hong Kong event.

The breakaway company jump-started Bruce Lee’s career with hits like “Fist of Fury” and “Enter the Dragon.”

In 1979, it has signed Jackie Chan, casting him in his first English-language production, including the star-studded 1981 action comedy “The Cannonball Run.” Golden Harvest also made the “Once Upon a Time in China” series starring Jet Li. 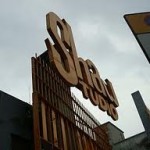