Nowitzki led the Mavericks to this year’s NBA title over the Miami Heat and was named the finals MVP.

The German president praised the NBA basketball player as one of the “giants of German sport,” amid hopes that he will lead his country’s team to the 2012 Olympics.

Wulff praised Nowitzki for remaining “modest and restrained” despite his success.

Nowitzki will play at the European Championship for Germany, which starts in Lithuania. The two finalists qualify for the Olympics in London.

The German basketball player frequently visits his country, where he and his sister have a foundation that supports children around the world. 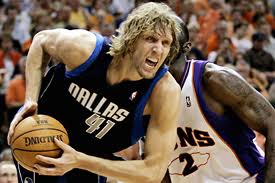