Thousands of people around the world are fallen victims to lightning. In Brazil alone, there are 1,300 people who succumb to lightning strikes.

According to a study done in Brazil, each degree of increase in global mean temperature will result in a ten to twenty percent increase in the amount of lightning.

In the last ten years, Brazil has been the target of an estimated 57 million lightning strikes, the most in the world.

Research has estimated that 30 percent of all power outages are lightning related with total costs brought about to one billion dollars (US $1 billion dollars). Just exactly what do we know about lightning and how do we deal with it?
Basically, lightning comes from thunderclouds which form when hot moist rises into the atmosphere and condenses.

Hot air rises when heated by the sun, carrying water vapor into the sky. As it rises, the hot air mingles with the colder air and moisture condenses into water droplets.

Clouds are created when these water droplets become visible. The droplets increase in size as the cloud grows and becomes heavy falling down as rain.

Thunderclouds are large masses that cover wide across at the base and reach 40,000 feet or more into the atmosphere.

In dealing with it, a lightning protection system in the form of lightning rod that intercepts lightning bolt and transmitted it into the ground without inflicting any farther damage.

It is considered to be 99 percent effective in preventing potential lightning damage. Lightning always accompanies thunderstorms.
If you can hear the thunder, you are close enough to be struck by lightning.

*** If you are caught outside during thunderstorm seek cover indoors immediately. Take shelter in an enclosed building structure or a steel frame structure. Do not take shelter underneath a tree for cover, taller object are struck more frequently.

*** Avoid to be near with metal objects such as fences, bleachers or tall poles. If swimming or boating, seek shelter on land as quickly as possible. If caught in an open field, crouch low and keep your legs close together.

*** When inside you home or building, stay away from doors and windows. Most importantly install a lightning arrester to protect your home. 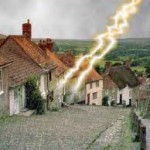