Around half million residents live in a vast slum named Naser City, one among the dozens squatter settlements that sprung up around Baghdad since the American invasion of 2003.

Naser City grew through the waves of sectarian violence that displaced people and more recently because of unemployment.

People leave their homes every night to scavenge in the neighborhood to the south before the collecting garbage trucks come.

As Iraq’s economy is in shambles, some people earn their living through scavenging like Tarish who found his livelihood in an underground economy that sustains whole neighborhoods .

Around him were his fellow foot soldiers in their new found marketplace, where scavengers and middlemen meet to do their transaction. Around the environs were piles of sorted out garbage by types.

In front of a stretch of makeshift houses, they threw their haul onto a scale with some kilograms of aluminum cans, a hoard of scrap metals and wires which they sold totaling an amount enough to buy food for themselves and their families.

Ali Hasun, 27, a middleman has bared that people are dependent on garbage for a living, gesturing around him at a horizon of improvised houses, a city economically dependent on refuse.

People need to pick up garbage because there are no chances to work according to Governor Salah Abdul Razzaq.

Scavenging has its codes, there are informal turf agreements, there are two shifts and timing is everything, according to Karar Kareem, 16, who lives in a squat at the edge of Sadr City. People throw their garbage late at night and early in the afternoon.

On a recent morning, Haider Saad, 23, a scavenger found his supposed prospective haul has disappeared. According to him, the garbage truck collected the garbage at midnight instead of early morning.

People moved to Naser City, from Amara, east of Baghdad, at the height of sectarian violence in 2005, they could not find work in Amara or Baghdad.
Their children commute to a school outside the settlement. They support their family by collecting garbage.

They cook and heat the house by burning wood, because oil is too expensive. When there is no wood, they wrap themselves in blankets.

Baghdad’s mayor, Saber al Essawy bared the city’s plan to build up two recycling plants. “In the future those people will have to find jobs,” he said. “They are a bad mark on our society.” As a public official he is determined more than ever to take up the cudgels in improving the plight of his people. 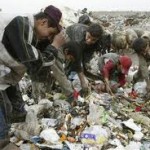 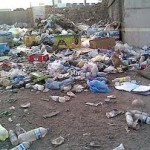 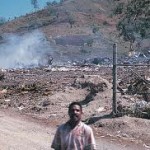