One in three Britons by the age of 65, suffer from the swollen blueish veins in their legs, that bulge just under the surface of the skin.

They are caused by blood putting downwards pressure on weak vein walls. Experts now think genes play a large role in who gets them.

Most varicose veins do not cause medical problems, although they sometimes result in serious leg ulcers, but they are unsightly and many people want them removed for cosmetic reasons.

Traditionally surgeons get rid of them by cutting and pulling them out, a process known as ‘stripping the vein’. However, this can itself cause unsightly blemishes and recovery can take months.

Newer methods include laser and radio frequency therapy, which both heat up the veins to such an extent that they become gummed shut.

Varicose veins can be treated in just an hour with a novel procedure that involves gluing them shut, doctors have said.

Very small quantities of a special non-toxic glue are injected into the affected veins, using a tiny catheter guided by ultrasound.

Blood then finds its way through other more healthy veins and the diseased varicose veins wither and become less visible. Early trials have shown good results.

Professor Alun Davies, who has helped treat 12 patients at Charing Cross Hospital in London, said: “It does seem to work. So far it has been very straightforward and all the patients have been fine. One had a complication of inflammation on the skin but that soon settled down.

“However, these are very early results, and how it will compare with other procedures longer-term is difficult to tell.”

Dr. Rodney Raabe, from US firm Sapheon which came up with the method, believed VenaSeal was better because there was “no need for local anaesthetic to be administered the full-length of the vein to reduce any pain”.

Results of a small-scale trial on 38 people, presented last summer at a medical conference in Slovenia, were promising.

Peter Bryant, 73, a taxi driver, became the first patient in Britain to undergo the procedure in March.

He said, “The whole visit was over in an hour and I walked out feeling absolutely fine with just very slight bruising that soon disappeared.

“It was absolutely wonderful. I’ve had no cellulitis since and my varicose vein is gone.” 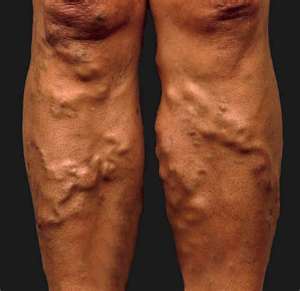