Once present in a colony, WNS can wipe out the entire bat population and has been first recorded in New York in 2006. It is now present in 20 states and four Canadian provinces.

Despite efforts to control the disease, it has killed more than 5.5 million bats and it has continued to overrun across North America.

Last year, researchers and policymakers agreed on a national action plan in order to limit the disease’s impact.

Research just published provides further evidence that the disease is caused by the fungus, and that it originated in Europe.

WNS is named after a white fungus that appears on the muzzle and/or wings of infected animals, and has been described by some biologists as the worst US wildlife health crisis in living memory.

“We recognize that bats are moving the disease pretty efficiently themselves,” according to Ms. Ann
Froschauer from the US white-nose syndrome (WNS) co-ordination team at the Fish and Wildlife Service (FWS).
The fungus associated with the disease, Geomyces destructans (Gd), thrives in dark, damp places such as caves and mines.

Recent studies have painted a bleak picture for at least half of US bat species, which rely on hibernation for winter survival and are therefore potentially susceptible to the disease.

A team of researchers warned that some species’ populations could become locally extinct within two decades, writing in the journal Science in August 2010.

Another team of researchers estimated the loss of bat species, which help control pest populations, would cost the US agriculture more than US$ 3.7 billion a year.

A paper published this week in the Proceedings of the National Academy of Sciences builds on other recent research suggesting that the fungus is found in populations of bats in Europe without triggering mass mortality.

An international team of scientists said their findings showed that a species of bat found in North America developed WNS if it was exposed to either US or European samples of the fungus.

This provided “direct evidence that Gd is a novel pathogen to North America from Europe”, they suggested.
Ms. Froschauer welcomed the latest development: “We are hopeful that this will help us better understand ways that we could mitigate the effects of the disease.

“It could help us identify the characteristics that are allowing European bats to fight off the disease.” 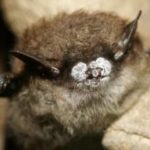