Canola, whose seeds are pressed to make the popular cooking oil, is a type of oilseed rape developed by breeders in Canada. In the US, it is grown mainly in North Dakota and Minnesota through cultivation, is spreading.

Genetically engineered versions of the canola plant are flourishing in the form of roadside weeds in North Dakota, in which scientists say, that it is one of the first instances of a genetically modified crop establishing itself in the wild.

The roadside plant apparently start growing when seeds blow from fields or fall out of trucks while transporting the crops to market. In the plains of Canada, where Canola is widely grown, roadside biotech plants resistant to herbicide Roundup have become a problem, said Alexis Knipel, who has just completed a doctoral dissertation on the subject at the University of Manitoba.

Since some farmers can no longer use Roundup to control the stray canola plants, they have returned in plowing their fields to control the weeds, a practice that contributes to soil erosion Knipel said.

The proliferation of roadside canola would make it difficult to keep organic canola free of genetically engineered material, Knipel added .
Even before biotech crops were developed, canola grew on roadsides, it said; now that 90 percent of the canola planted by farmers is engineered, it would be reasonable to expect a similar percentage in roadside.

Samples of the 604 plants collected, 80 percent where genetically engineered, some were Roundup ready, with a gene conferring resistance to Roundup, also known as glyphosate. Others were Liberty Link crops, with a gene conferring resistance to glufosinate according to Cynthia Sagers, a biology professor at the University of Arkansas, who led the study. 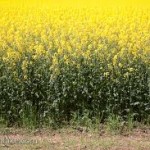