Giant herbivorous sauropod dinosaurs may have produced enough greenhouse gas with their flatulence as research suggests.

The methane gas they have produced could be enormous and have heated up the earth.

The vegetarian dinosaurs recognizable by their long necks and whip like tails and weighing from around 20 tons like the Apatosaurus and as high as 110 tons like the largest and the longest among them the Diplodocus, a genus of diplodocid sauropod dinosaur were widespread and are predominant species around 150 million years ago (Mesozoic Era) and they produced a lot of wind.

Scientists believe that ruminant herbivorous animals, just as in cows, methane-producing bacteria aided the digestion of sauropods by fermenting their plant food.

Microbes in the stomachs of ruminant species produce methane gas as they break down vegetable matter which is released as flatulence.

By measuring up the digestive wind of cows, they estimate that the population of dinosaurs, as a whole, produced 520 million tons of gas annually.

They suggest the gas could have been a key factor in the warming of the earth during those times.

“Indeed, our calculations suggest that these dinosaurs could have produced more methane than all modern sources, both natural and man made put together,” according to study leader Dr. Dave Wilkinson, from Liverpool John Moores University.

Methane is a more potent greenhouse gas than carbon dioxide, with a stronger ability to trap heat and is known to absorb infrared radiation from the sun, trapping it in the Earth’s atmosphere and leading to increased temperatures.

Current methane emissions amount to around 500 million tons a year from a combination of natural sources, such as wild animals, and human activities including dairy and meat production.

Expressing his surprise at the comparative figures, Dr. Wilkinson added that dinosaurs were not the sole producers of methane at the time.

“There were other sources of methane in the Mesozoic so total methane level would probably have been much higher than now,” he said.

Previous studies have suggested that the Earth was up to 10 degrees Celsius (18 degree Fahrenheit) warmer in the Mesozoic Era than today.

The research was published in the journal Current Biology. 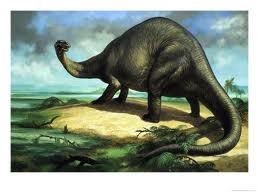